“Imagine for a second that you have to write an email that goes out to 200,000 people. You spend all week on it, making sure there are no typos or broken links; schedule the email; walk into the office; and the first thing you hear is, ‘The most important link is broken.’ …”

As the name implies, the basis of CreativeMornings is simple: a morning conversation and casual discussion guided by the community/creative individuals. Started in 2008, Tina Roth Eisenberg started CreativeMornings for the sake of delivering inspirational events accessible for everyone. Moreover, the whole series of CreativeMornings activities are free for all.

Today, CreativeMornings exist in hundreds of cities around the world. In Indonesia, it takes place once a month on Fridays in Jakarta and Bandung. Creativemornings invites speakers relevant to the life of the creative community in each of the city and some inspirational figures relevant to the topic. Can anxiety become an oppotunity?

Hubton Indonesia attended one of CreaCreativeMornings event in Bandung on January 26, 2018. Located in Maranatha Christian University, the topic of the day was “anxiety”. In the event, a designer and free-thinker, Meizan Diandra Nataadiningrat, came as the main speaker. The event was supported by CreativeMornings’ global partners, including YouTube, MailChimp, Shutterstock, Adobe, WordPress, etc. It was also supported by the local partners from Bandung, including CMYK Digital Printing Service, Maranatha Christian University, House The House, and The Local Enablers.

The event began at 09:15, with approximately 200 participants. Most of them were design and business students enrolled at Maranatha University. Among them were also the creative workers who live and work in Bandung. The event started with an opening speech from Satrio, a volunteer in CreativeMornings Indonesia. He explained a brief history of CreativeMornings global movement in Indonesia. 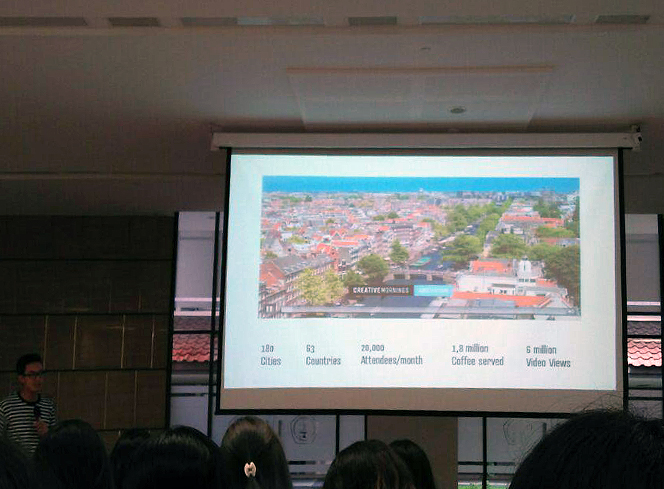 After that, Melvin Goenawan hosted the rest of the day. Melvin, who is also a founder of CMYK Digital Printing Service, explains how anxiety is can be an opportunity in developing his printing business. This comes from his experience seeing many graphic design/art school students’ apprehension when searching for printing vendors that open late at night. Most design students have a tendency to do their assignments close to the deadline. Malvine concluded that working with a high level of anxiety like that might have contributed to the creativity of the students. In other words, anxiety might be one of the leaps in unlocking new creative potentials. 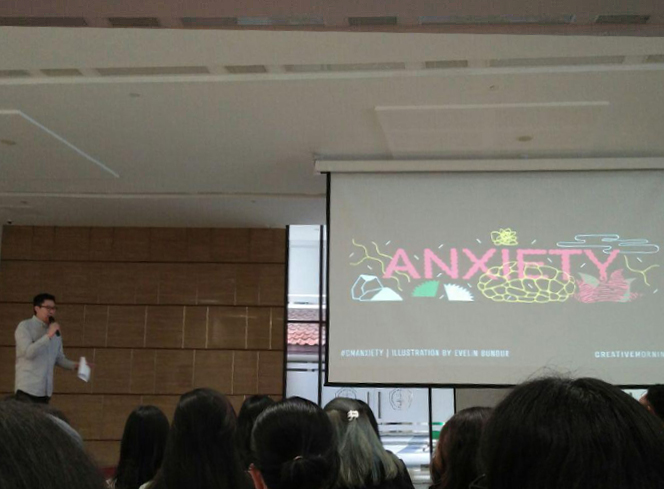 After the opening talk, the event proceeded with the main speaker, Meizan Diandra Nataadiningrat, or Ican. In his session, Ican shared his experience in channeling his anxieties into creative projects. This results in the works of House The House (HTH), which is a creative studio where he coaches with several colleagues. Basically, HTH is a studio with people that have multidisciplinary backgrounds that mainly moves on the creative industry rails. They set off from the urgency to share their thoughts to a wider audience. 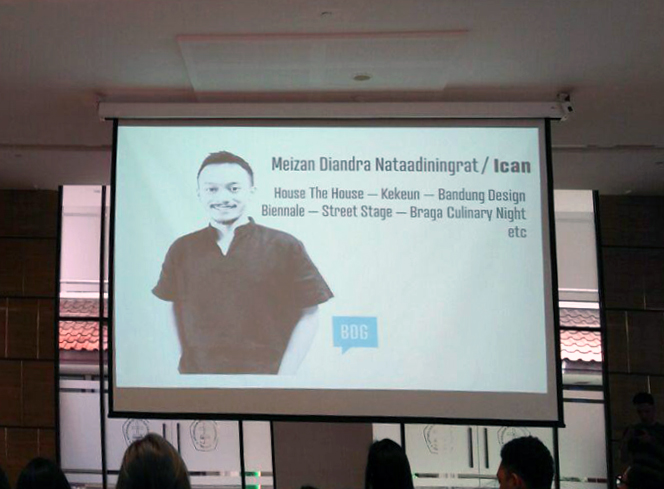 Meizan Diandra Nataadiningrat, a.k.a Ican, is the main speaker for the day’s session

Moreover, Ican discussed the two prominent projects of HTH, namely Keuken Bandung and Disturbing the House. Apart from these two projects, HTH always puts itself in a sense of anxiety. Hopefully, somewhere along the way, the anxiety will expose them to new ideas. Although rather daring, this is all based on proven experience.

First, there was a sense of anxiety about the rather-abandoned public outdoors in Keukeun Bandung. Therefore, they use festive events for the public to optimize the public outdoors. Then, a similar approach was also applied in establishing Disturbing the House, a musical event with the concept of “rave party”. The event combines visual and musical elements, also in a rather abandoned venue: a big and old warehouse that used to be a palm oil factory.

Fundamentally, the creative forces incorporated in HTH aims to re-establish the generally-perceived “negative space” or “abandoned space”. In addition to the infrastructure, the movement of the people in HTH is also based on values that are beneficial to others. In conclusion, the anxiety arising from the decision to cultivate the “abandoned and unknown venues” is the primary motivation in developing Ican’s ideas. For instance, House The House, which thereafter creates a breakthrough on the anxiety. 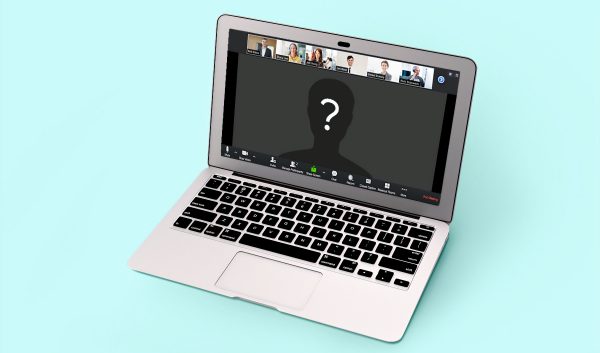 The 2020 Version of 7 Habits of Highly Effective People (at Work!)

A summary of Hubton HR Training on applying the 7 Habits of Highly Effective People into our new culture of remote working. 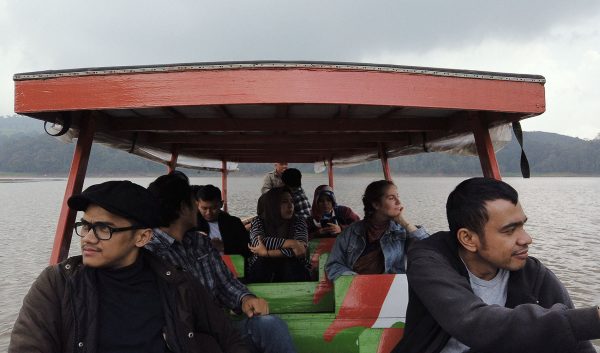 A Retrospective Meeting at Hubton

How we look back, reflect, and be better at work. 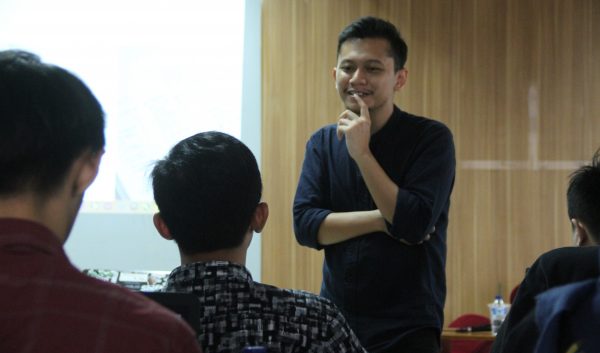 Hubton at a Mobile UI/UX Design Workshop for Beginners

On Sunday, May 5th, 2019 our COO and Creative Director, Zaki Fitria, mentored the participants of a UI/UX design workshop… 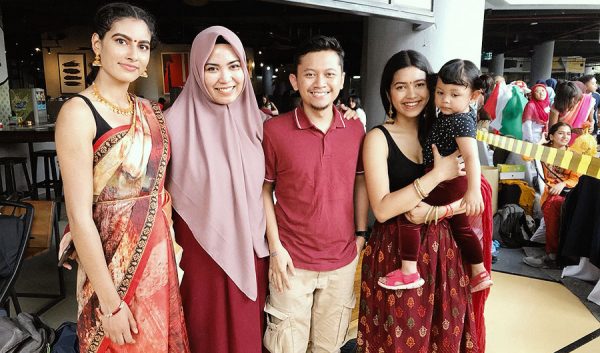 On June 20 this year, we welcomed Snehaa Suresh to join the Hubton family. Although temporary, her presence was very…